"Local elites and the manufacture of inequalities". Guided tour between history and memory 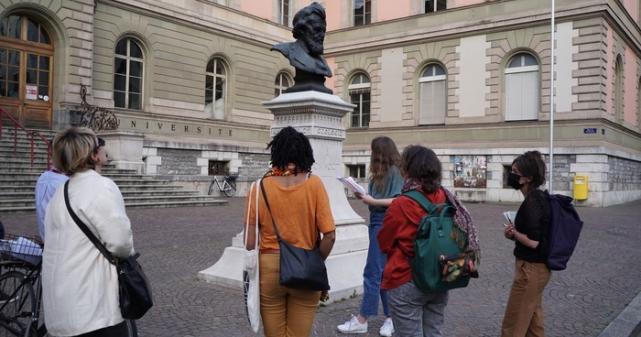 Meeting point: in front of the Uni Bastions hall, de-Candolle Street 5 at 2.00 pm.

An urban tour around the figures of the Genevan savants, followed by a discussion at MEG about the future of colonial collections . French speaking. 5 November 2022 between 2:00-3:30 PM.

History shows that these assertions must be qualified. Politically and socially constructed, science has legitimised and conveyed a number of inequalities. Thus, in the 19th century and for a good part of the 20th century, many scientists and scholars, blinded by their beliefs, held discriminatory discourses, ranging from racism to sexism, validism and classism, which they presented as scientific truths. In this tour, the public will meet Carl Vogt, Emile Yung and Eugène Pittard, whose theories contributed to the construction of these inequalities. Following in the footsteps of this past means questioning the persistence of inequalities and discrimination in the present, but also understanding the construction of science as an ideologically situated phenomenon.

The tour ends with an immersion in the history of the MEG and its colonial collections, assembled by Eugène Pittard in the early 20th century.

Register via the electronic form

Next event will be on Saturday 26 November 2022, same hours.

Discover the full range of tours on the website of Dialogue En Route, MEG's partner.

Event organized by an external organization