Sunday Movie : Brothers of the Trees 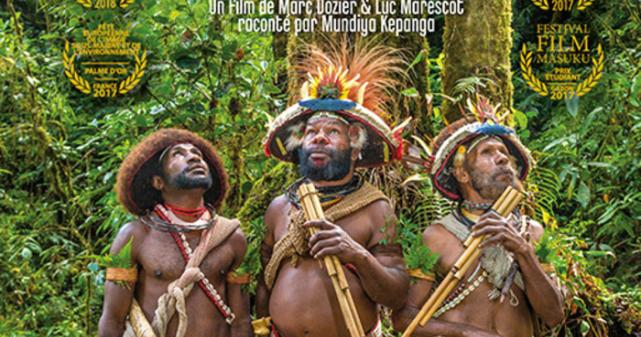 Screening of the film "Brothers of the Trees" followed by a discussion with Mundiya Kepanga, Papuan chief of the Huli tribe. Auditorium. Sunday 19 May at 4pm.

As part of the donation of a huli ornament by Papuan chief Mundiya Kepanga, MEG is organising a weekend of free events to celebrate this acquisition, in the presence of Mundiya Kepanga and director Marc Dozier.

In Europe for a few months, Papuan chief Mundiya Kepanga will stop by the MEG to offer a Huli ornament to the museum. With this gesture, he wishes to raise public awareness of the issue of deforestation of the primary forests of Papua New Guinea and the importance of taking care of one's environment.

As part of this weekend, the film "Brothers of the Trees" will be screened on Sunday 19 June from 4 to 5 pm in the MEG auditorium, followed by a meeting with Mundiya Kepanga.

The film "Brothers of the Trees" will be screened from 4 to 5 pm in the MEG auditorium, followed by a meeting with Mundiya Kepanga.
Mundiya Kepanga is a Papuan chief from the Huli tribe in Papua New Guinea. He is a child of the forest, born on the leafy carpet of an age-old ficus tree. In the manner of a traditional storyteller, he shares his love of the forest with poetry and reveals the extent of the deforestation that has dramatically accelerated in his country in recent years.

We follow him as he travels from his village to the most important international meetings: from a meeting in the Senate to the conferences organised for the COP21 to UNESCO with the actor and activist Robert Redford. We follow the rise of the little Papuan chief who becomes an ambassador for the forest and a voice for indigenous peoples.

By offering his most precious headdress to the Musée de l'Homme, he carries his message dedicated to all the people of the planet: his forest is a universal heritage that produces the oxygen we all breathe and that must be safeguarded. A call to protect the world's primary forests that reminds us that we are all brothers of the trees.

This film will be screened in VO with French subtitles.

The trailer can be found here.

Mundiya Kepanga, Papuan chief of the Huli tribe, he leads a traditional life in his village, in the heart of one of the world's primary forests. In his culture, a tree is planted at each birth, and each deceased person is buried at the foot of a tree, since the latter is considered a "brother". "As long as there are trees, there will be people", Mundiya likes to repeat, like his ancestors. Committed to the defence of the environment and particularly the primary forest of his country, the traditional leader has been travelling in Europe since 2003 and gives conferences at the invitation of museums, researchers or schools. He has spoken on numerous occasions at international conferences in Paris (COP21...), London and New York.

Translation: Marc Dozier, photographer, filmmaker and fixer, devotes most of his work to Papua New Guinea. His work has led to the publication of numerous books and documentaries.